The hit TV series comes to the screen! The most powerful of enemies. The death of companions. And when all the mysteries are understood, a full stop.

Want to win a pair of tickets to this latest Japanese movie to hit the big screen in Singapore? Details of the SPEC~Heaven Movie Preview Tickets Giveaway Contest here.

A cruiser yacht, with all aboard mummified, is discovered drifting out at sea. Toma and Sebumi suddenly face a series of spec-holders controlled by a mysterious ‘Ninomae’, who turns out to be Toma’s younger brother…except that he’s supposed to be dead. Ninomae tries to enlist Toma among the specs using whom he plans world domination, but she refuses, saying she wants to live a normal life. Cursing Toma for getting him into this, Sebumi nonetheless does his utmost to protect her. Toma’s left arm is in a cast: what is she hiding there? The case grows in scale, eventually involving the government. What is the ‘simple plan’ going on behind the scenes? And what is the course of the future traced out by the person who recorded ‘the Third Prophecy of Fatima’? 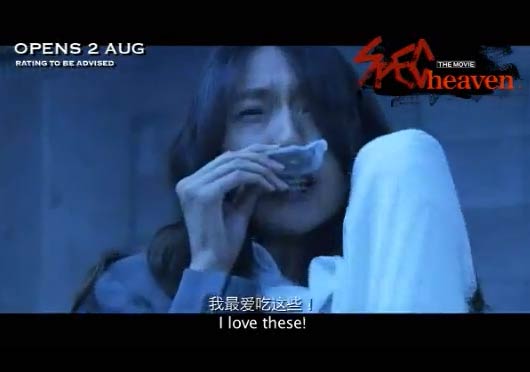