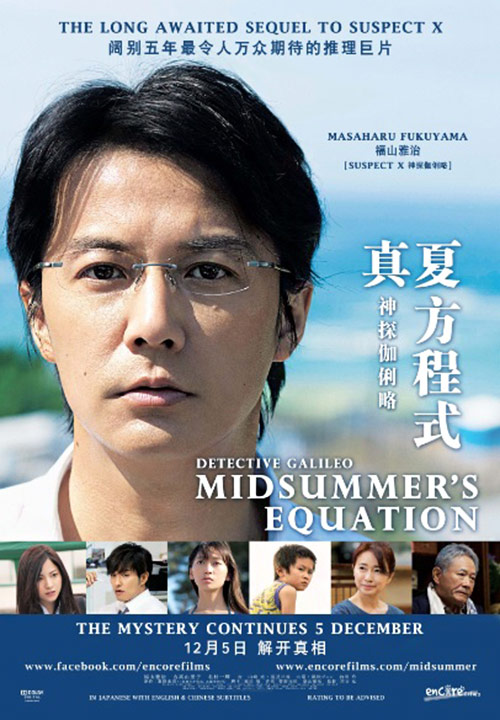 Win a pair of movie tickets from Otaku House to the marathon screening of Detective Galileo: Suspect X and Midsummer’s Equation on 23 Nov 2013! You get a free movie poster and Suspect X notebook too!

Fans of the popular Galileo series, don’t miss the upcoming Detective Galileo marathon! Not only are you catching the new movie before the rest of Singapore (Midsummer’s Equation opens Dec 5), you get to watch Suspect X and Midsummer’s Equation together back-to-back this Saturday.

(Or win a pair of tickets to the marathon here)

The summer sea, fireworks, a boy… and a mystery that must not be solved.

Manabu Yukawa, a physicist, is invited to speak on the panel of an explanatory meeting for a seabed mining plan in Harigaura, where the beautiful sea remains untouched. There, he stays at a family-owned inn called “Rokuganso.”

Yukawa meets a boy named Kyohei on the train heading to Harigaura. Kyohei is the nephew of the proprietress of Rokuganso Inn. He had come to visit his aunt and uncle by himself during summer vacation because his parents were busy with work.

The next morning, a man is found dead on the rocks below a concrete embankment. The man was Masatsugu Tsukahara, who had also been staying at the inn. Was the death an accident or murder?

Kyohei becomes involved in the case in an unexpected way. Narumi, the only daughter of the innkeepers, devotes herself to preserving the sea of Harigaura. Her parents who run the inn are considering shutting it down because of the decline in the local tourism. And why had Tsukahara come to Harigaura in the first place? As the complicated connections behind the mysterious death gradually begin to unravel, Yukawa discovers the heartbreaking truth lying at the heart of the case.

“Galileo” returns to take Japan by storm once again! The second film is Midsummer’s Equation, the most moving bestseller in the original series!

Galileo was a Fuji Television Network drama series that was broadcast in 2007 in the popular 9 p.m. Monday night slot. Masaharu Fukuyama starred as Manabu Yukawa, the eccentric physicist with a brilliant mind, and his overwhelmingly convincing performance created a great sensation. The series marked an exceptionally high average viewer rating of 21.9%, and the feature film version released the following year, Suspect X, became a megahit grossing 4.92 billion yen at the box office.

5 years later, in summer 2013, Fukuyama returns to the screen as Manabu Yukawa aka “Galileo”! One of the most popular stars in Japan who is continually challenging himself to break new ground, Fukuyama takes on the starring role once again in the second Galileo movie, Midsummer’s Equation. Based on the novel by the same title by bestselling author Keigo Higashino, it is the latest book in his smash hit series with a total of over 10 million copies in circulation. Widely viewed as the most moving episode in the series, Midsummer’s Equation is a masterful mystery novel depicting the profound ties between people against the backdrop of a lyrical seaside town. It is interesting to note that in this story, the human side of the eccentric Yukawa is depicted as he tackles the mystery to protect a boy in spite of his dislike for children in general. Also, Yukawa’s personal view regarding the modern-day dilemma of “the co-existence of scientific technology and nature” is also presented, adding further depth to this work.

Solid performances by a stellar supporting cast back up Fukuyama in this film. The cast includes familiar faces from the TV drama such as Yuriko Yoshitaka as police detective Misa Kishitani of the Metropolitan Police Department Criminal Investigations First Division and Kazuki Kitamura as Lieutenant Shunpei Kusanagi. Anne plays the role of Narumi Kawahata, the young woman holding the key to the mystery, and Jun Fubuki and Gin Maeda play the Kawahatas, Narumi’s parents with secrets to hide. The screenplay is by Yasushi Fukuda of the hit TV series Ryomaden and the director is the master of human dramas, Hiroshi Nishitani of Suspect X. Midsummer’s Equation will surely be the most moving blockbuster hit of this summer! 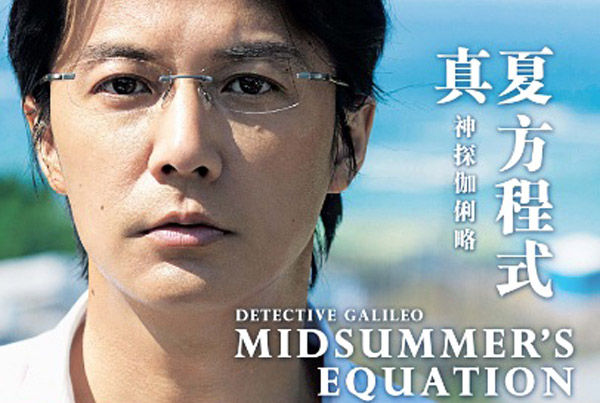