Actually, while we’re on the subject of her hands, they are using a softer plastic than older Nendo figures, which seem to not fit as tight and tend to pop off the socket easier. This tends to be a problem for when I’m toting her around to take photos. If I’m trying to be “ninja” and pull her out of my bag fast, sometimes, her hands aren’t on her arms… so… it’s like a ninja fail… 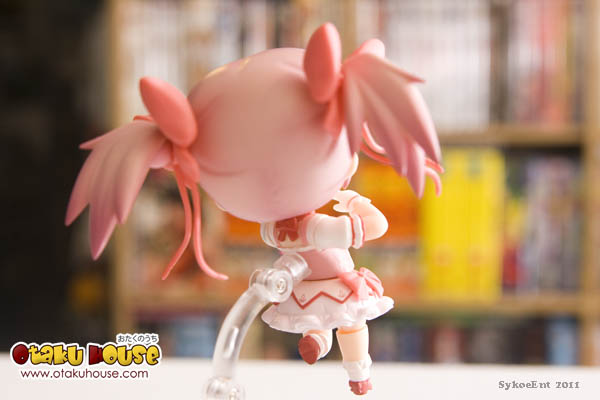 As I said about the “plugs into the back of Madoka”, it is exactly just that. The base arm, is grounded to the peg base and the “head” of the arm that connects to the back of Madoka, is a separate piece. My guess is that they are planning to utilize this base for the older Nendo’s by switching out the “head plug” with something more of a “hug arm”, that could hold up the older Nendo figures.

The back detail, of Madoka, wasn’t costed out, and continued with the design of her costume down to the bow tied behind her neck. 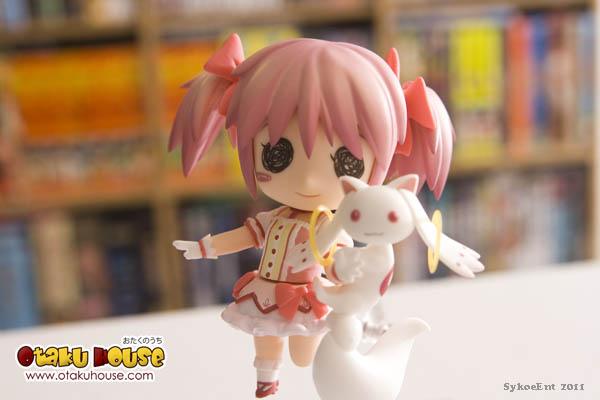 CRAZY EYES!!! This face is my favorite out of her set. I use this face when posing her around sugary treats to give her that “Sugar Hyper” look…
Kyubey rests on Madoka’s arm by a plug on her arm that is plugged into Kyubey.

Kyubey, itself, is detailed quite nicely, with its flowing… uh… ear hair thingies with attached earring loops.The tail is articulated and it came with a second “standing” body.

The ball joint used to connect the tail to the body is shot in a clear plastic… which… to me… is weird. Clear plastics tend to be brittle and break easier. Because the tail is supposed to be popped on and off in between Kyubey’s different bodies, that joint is going to see a lot of wear and tear, and possible breakage… 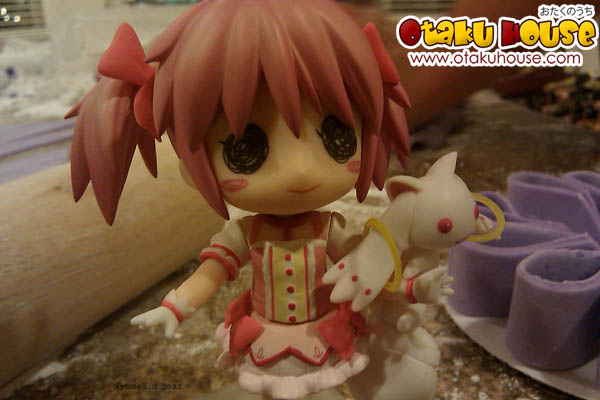 Overall, the Madoka Nendoroid is a must get for all fans of Mahō Shōjo, or just fans of anime and cutie stuff in general. Just, when you’re playing with your toys, know its limits and be aware of the spots easily broken, and she’ll be with you forever! (^_^) 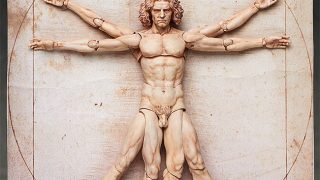